As the ideology gains more exposure through social media, racialism – better known today as racism – has raised several questions among a number different communities. It was “at the heart of North American slavery” and is also found in the idea of colonisation that was often carried out by Western-Europeans – particularly in the 18th century (Smedley). Though it is believed by many that you can, this article will look to explain exactly why you can not be racist to white people.

First we’ll look at the definition of the word: racism is the “systemic oppression of a racial group to the social, economic, and political advantage of another” (Merriam-Webster). If we consider the history of racial discrimination, it is highly unlikely that you will find examples of the opression of white people. Even during the Holocaust, Jews were – by many – viewed as non-white (Green, Emma). There are undoubtedly several examples and instances in which white people may experience personal prejudice, but they have not lived through racial discrimination. It is them who reap the advantages of systematic racism – highlighting the concept of ‘white privilege’.

A good example of this would be the education system in America: according to a study carried out by the U.S. Department of Education, Black students in kindergarten through to the 12th grade are 380% more likely to be suspended than their white peers. This statistic shows that the disparities found in education begin at the earliest grades – that racism knows no bounds. The reason for the higher likelihood of Black students getting disciplined is because of the stereotype that they are troublemakers. To the racist eye, their misbehaviour looks more severe than the exact same behaviour from that of their Caucasion counterpart. Moreover, “Black boys as young as 10 were viewed as less innocent than their white peers and had a greater chance of being mistaken for older children” (American Psychological Association). These are just two miniscule examples, both of which contribute to the widely known school-to-prison pipeline.

Racism can also be defined as the discrimination against someone based upon pre-determined stereotypes pertaining to the colour of their skin; this further supports the argument that you can’t be racist to white people because there are no pre-determined stereotypes that have the power to systematically oppress them. For example, it is common for BIPOCs to not get hired solely because of their race – in fact, the unemployment rate in America for Hispanic/Latino men over the age of 16 was 8.5% in the fourth quarter of 2020 whilst being merely 3.1% for white people. 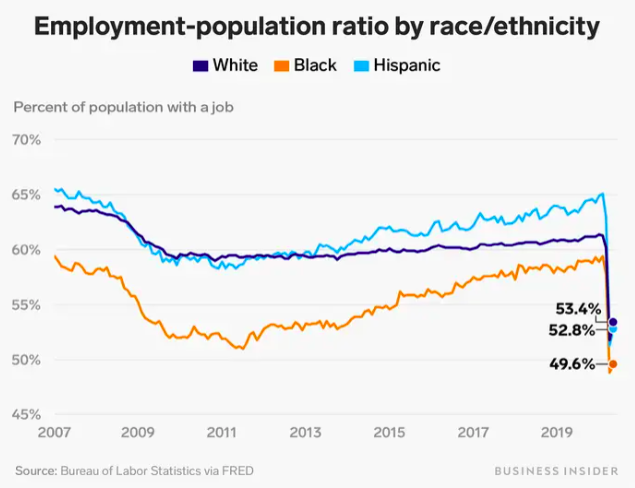 Stereotypes for BIPOCs include the ‘rowdiness/ratchetness’ of Black teens, the assumption that all Asians eat cats/dogs, and the idea that Mexicans live in a household of 10 people. What stereotypes can there be found for white people? Jokes have been made about them – e.g. that they can’t dance – but they are not harmful in any way. The assumption that you don’t season your food properly will not stop you from getting a well-paying job or put you at higher risk of police brutality.

That right there, is the difference. The ‘innocent’ and seemingly harmless words hold so much more power over people of colour than they do over white people.

To put this in perspective, take the example of 18 year old Rodney Reese. One day last month, the Black teenager was walking home from work during a snowstorm when local police arrested him. There were reports that requested a welfare check of someone ‘stumbling through the snow’. Despite his repeated responses telling the officers that he’s fine – heard through the body camera footage released – they followed him and, minutes later, arrested him with an official charge of ‘pedestrian in the road way’.

When interviewed later, the cops said they felt as though he was a threat. Because of their racism, internalised or not, Rodney spent the night in jail. For walking home. Had it been a white boy walking down that street in Plano, Texas, the outcome would have been extremely different. “It’s ‘cause I’m Black, I fit a description. It hurts man. I don’t even think this call would’ve happened [if I wasn’t Black]. I honestly don’t.” said Rodney Reese to Fox 4. The day after his arrest, Police Chief Ed Drain came out with the following statement, defending the actions of the officers:

They didn’t know. They didn’t even bother to ask. It’s clear to see that the arrest was based upon race and race alone. The actions of these two officers are one of the countless cases which reveal the implicit bias that is found in so many American legal system workers.

Breonna Taylor. Antonio Rodríguez. Tamir Rice. Soon Chung Park. George Floyd. Sandra Bland. Eric Garner. Aiyana Jones. Walter Scott. Yong Ae Yue. Ezell Ford. Atatiana Jefferson. And so many others. Too many others. Too many mothers, fathers, children, gunned down in the street, burned alive, left to rot. All because of the colour of their skin. As the oppressor, you cannot be oppressed. This is not to say all white people are racist. By no means. But the privilege you gain from simply being lighter than the rest is undeniable. You can experience prejudice, yes. But you have not, and can not, experience racism.